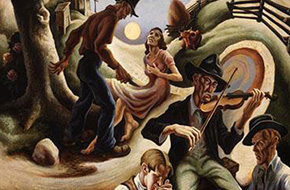 Murder and mayhem, robbery and rapine, love that cuts to the bone: American ballads re-tell the wrenching themes of their English and Scottish cousins. Transplanted in the new world by old world immigrants, the traditional story-song of the Anglos and Scots wound up reinvigorated in the mountains of Appalachia and along the Canadian border. John Perrault talks, sings, and picks the strings that bind the old ballads to the new.