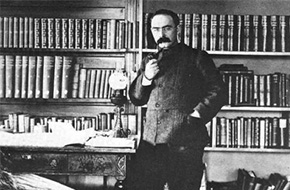 Rudyard Kipling was the most internationally-celebrated author of his day. The first four years of his marriage and fatherhood were spent in New England where he built his dream house - Naulakha in Dummerston, Vermont - now preserved as a Landmark Trust property. It was there that he penned The Jungle Book and other classics. These were productive and happy years for the young literary giant, but eventually deeply troubled. Although Kipling was an intensely private individual, Jackson Gillman's sensitive portrayal provides an inside look at the writer's experience in New England and some of the controversy surrounding this complex man. Part lecture, part living history, part storytelling, Jackson's presentation includes a selection of the classic Just So Stories.