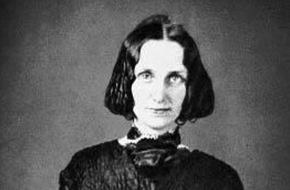 Mary Baker Eddy was New Hampshire's most important and most innovative religious thinker. Mark Twain called Eddy "the most interesting woman that ever lived, and the most extraordinary." The church she founded, The Church of Christ, Scientist, profoundly affected both American ideologies of religion as well as public opinion of the role of women in society. This program discusses the ways in which Eddy's experience as a woman in Victorian-era America influenced her gendered understanding of God as well as the nature of humanity, the body, health, and the place of women in powerful organizations. In Eddy's theology, the divine was not punishing but welcoming and caring; not a domineering father but a loving father-mother -- a perspective that uplifted the feminine in both the divine realm and the human world. Although Eddy's perspectives on healing have always been controversial, her rejection of medicine stemmed from encounters with nineteenth-century physicians that she felt were demeaning and violating. Eddy instead advocated a patient-centered method of self-empowered healing, a perspective that has much in common with later views of positive psychology and the power of the mind over the body.