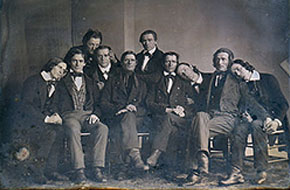 Liberty Is Our Motto!: Songs and Stories of the Hutchinson Family Singers

The year is 1876, and New Hampshire's own John Hutchinson sings and tells about his famous musical family "straight from the horse's mouth." Originally from Milford, NH, the Hutchinson Family Singers were among America's most notable musical entertainers for much of the mid-19th century. They achieved international recognition with songs advancing social reform and political causes such as abolition, temperance, women's suffrage, and the Lincoln presidential campaign of 1860. In this living history program, Steve Blunt portrays John Hutchinson. He tells the Hutchinsons' story and shares their music with lyrics provided. Audience members are invited to sing along on "The Old Granite State," "Get Off the Track," "Tenting on the Old Campground," and more.