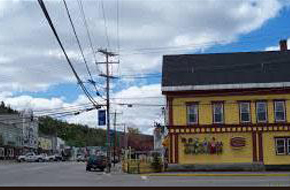 In the Evil Day: A Small Town in New Hampshire and the Crime That Stunned the Nation