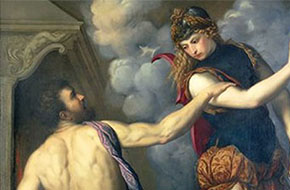 How Did the Greeks Believe Their Myths?

Greek myth exerted a powerful influence on the Greeks and Romans, and as cultures and circumstances changed, different methods developed to incorporate mythology. Perhaps most notably, says presenter R. Scott Smith, Christians adopted and adapted Greek myths by allegorizing the stories, seeking to uncover the real-and Christian-truths underneath the facade of pagan gods and heroes. Some Greeks tried to rationalize the stories, imagining that they were simply ordinary events that were blown out of proportion. Others saw myth as pseudo-history, or sometimes pseudo-science. This program will investigate the major ways that the Greeks tried to explain and interpret their own mythical past over the course of a thousand years.