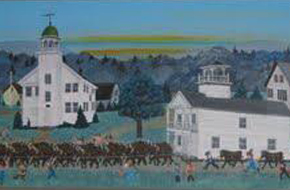 American slavery divided not just the North from the South, but also northerners from each other. In the mid-1830s, the emergence of an aggressive abolitionist movement provoked fierce blowback—including widespread mob violence in the North. Canaan, N.H., became one of many New England flashpoints after abolitionists there opened a school for all students, regardless of race or gender. Young Black men and women flocked to Noyes Academy but were soon driven away by a voter-sanctioned mob that dragged their school building a half-mile down the main street and threatened them with death. Students who passed through that fire—Julia Williams, Henry Highland Garnet and Alexander Crummell—went on to extraordinary careers in the fight against slavery and for Black civil rights. Historian Dan Billin presents an illustrated lecture that plumbs the depths of anti-abolitionist sentiment in antebellum New Hampshire and the courage of Black students who were destined for greatness.