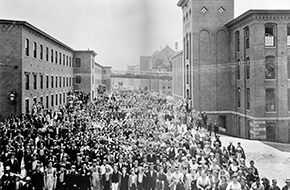 A Taste of the Old Country in the New: Franco-Americans of Manchester

Manchester is one example of the many industrial cities that attracted immigrants from Quebec in numbers large enough to warrant the creation and maintenance of an infrastructure of religious, educational, social, cultural, and commercial institutions that helped preserve this community's language and traditions. Robert Perreault shares stories about life in one of America's major Franco-American centers.