The Grapes of Wrath: More Relevant Today Than Ever 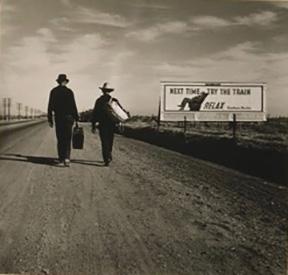 John Steinbeckâs classic novel The Grapes of Wrath has stirred and inspired readers for 77 years. The centerpiece of a multi-town community read funded in part by New Hampshire Humanities, this Pulitzer Prize-winning novel, set in the 1930s in the aftermath of the Dust Bowl, chronicles one familyâs forced migration to California â a microcosm of the widespread devastation of the Great Depression. Steinbeck confronted universal themes while bringing readers along on the perilous journey of one ordinary family struggling to survive and build a new life. The author won the Nobel Prize for his sharp, insightful, and compassionate exploration of human nature in this and other classic novels.

The Fireseed Alliance is coordinating this collaboration among fifteen New Hampshire libraries: Amherst, Bedford, Bow, Brookline, Dunbarton, Goffstown, Greenville, Greenfield, Hollis, Lyndeborough, Mason, Milford, Mont Vernon, New Boston, and Wilton. Participants will have the opportunity to take a closer look at Steinbeckâs examination of Depression-era America and to explore the ways this classic still resonates today. Project director Blanche Milligan notes, âThe planning team has found the book to be an excellent bridge to contemporary issues including the changes in farming in New Hampshire, poverty, income disparity, foreclosures, climate change, and how individuals and governments respond to a human crisis that is caused by both man and nature.â

Each library will host at least one discussion of the book. The project also includes film showings, lectures, community discussions, and living history performances that will broaden participantsâ understanding of the novelâs themes and how they relate to their own lives. From September 22 to 24, living historian Richard Maroid portrays President Franklin D. Roosevelt at four venues. On Tuesday, September 27 at 6:00 p.m. in Concord, Dr. Luchen Li, UNH professor and president of the International Steinbeck Society, will facilitate a screening and post-film discussion of John Fordâs brilliant 1940 film adaptation of The Grapes of Wrath. Li will be joined by New Hampshire filmmaker Samantha Davidson Green in a discussion of the film and its lasting legacy. The project culminates on Thursday, October 27 at 7:00 p.m. at St. Anselm College with author Jay Parini, who will discuss âSteinbeck in California: The Man and the Writer.â

This project also received one of 77 âBig Readâ grants awarded to cultural organizations across the country for 2016-2017 by the National Endowment for the Arts. Additional Big Reads events include photography exhibits, a âpaint night,â and the music and dance of the Depression era. On September 18, a kickoff event at the Labelle Winery in Amherst, featuring fiddlers Dudley and Jacqueline Laufman and local actors, will bring scenes from the novel to life. Learn more and view a list of events at www.fireseedalliance.org.
The NEA Big Read is a program of the National Endowment for the Arts (NEA) designed to broaden our understanding of our world, our communities, and ourselves through the joy of sharing a good book.