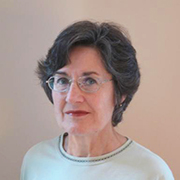 Liz Tentarelli had a career spanning over 30 years teaching high school and college students, including 19 years at Merrimack College in North Andover, MA. Although history was not her field, women’s history has been a long-time interest and avocation.

Liz has been a member of the League of Women Voters, a non-partisan political organization, for more than 25 years and president of the state League since 2009. The League is a direct descendant organization of the women’s suffrage movement. 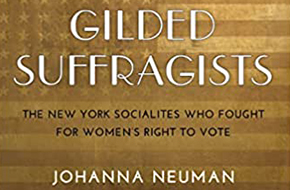 In the early twentieth century over two hundred of New York's most glamorous socialites joined the suffrage movement. Their names—Astor, Belmont, Rockefeller, Tiffany, Vanderbilt, Whitney and the like—carried enormous public value. These women were the media darlings of their day because of the extravagance of their costume balls and the opulence of the French couture clothes, and they leveraged their social celebrity for political power, turning women's right to vote into a fashionable cause.

Although they were dismissed by critics as bored socialites “trying on suffrage as they might the latest couture designs from Paris,” these gilded suffragists were at the epicenter of the great reforms known collectively as the Progressive Era. From championing education for women, to pursuing careers, and advocating for the end of marriage, these women were engaged with the swirl of change that swept through the streets of New York City.

Johanna Neuman restores these women to their rightful place in the story of women’s suffrage. Understanding the need for popular approval for any social change, these socialites used their wealth, power, social connections and style to excite mainstream interest and to diffuse resistance to the cause. In the end, as Neuman says, when change was in the air, these women helped push women’s suffrage over the finish line.

As part of New Hampshire Humanities' Perspectives Book Groups, we're reading "The Woman's Hour," by Elaine Weiss. The story of how American women won the right to vote, and the opening campaign in the great twentieth-century battles for civil rights.

Nashville, August 1920. Thirty-five states have ratified the Nineteenth Amendment, twelve have rejected or refused to vote, and one last state is needed. It all comes down to Tennessee, the moment of truth for the suffragists, after a seven-decade crusade. The opposing forces include politicians with careers at stake, liquor companies, railroad magnates, and a lot of racists who don’t want black women voting. And then there are the “Antis”–women who oppose their own enfranchisement, fearing suffrage will bring about the moral collapse of the nation. They all converge in a boiling hot summer for a vicious face-off replete with dirty tricks, betrayals and bribes, bigotry, Jack Daniel’s, and the Bible.

Following a handful of remarkable women who led their respective forces into battle, along with appearances by Woodrow Wilson, Warren Harding, Frederick Douglass, and Eleanor Roosevelt, The Woman’s Hour is an inspiring story of activists winning their own freedom in one of the last campaigns forged in the shadow of the Civil War, and the beginning of the great twentieth-century battles for civil rights.

Votes for Women: A History of the Suffrage Movement

The campaign for women's right to vote was a long one, from the 1848 Women's Rights Convention in Seneca Falls, New York to ratification of the 19th amendment in 1920. Who were the key players in New Hampshire and the nation? What issues and obstacles did they face? How did suffragists benefit from World War I in the final push for passage of the women's suffrage amendment? Who was left out when women got the right to vote? Using historic photos and documents, Liz Tentarelli will guide us on the journey. Liz is president of the League of Women Voters NH, a non-partisan organization that is the direct descendant of the National American Woman Suffrage Association.