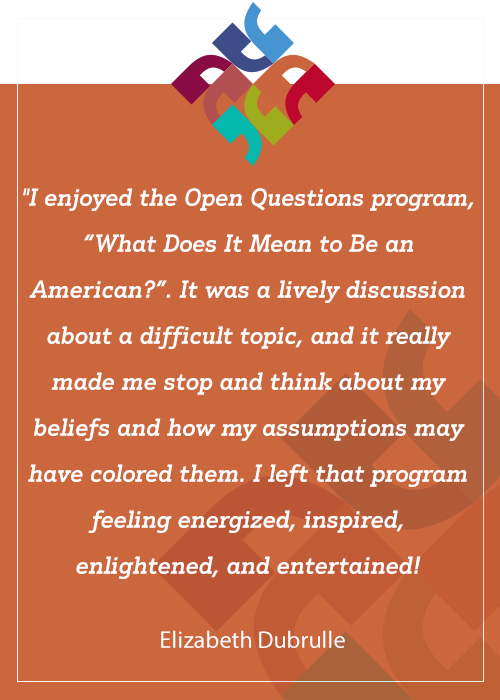 "Open Questions” is a new program presented by New Hampshire Humanities. This series explores essential questions about meaning and life that are important to Granite Staters. Each program is facilitated by philosophy professors using a thought-provoking discussion format. You can bring this program to your community by hosting an event on any of the topics listed below. For questions about this series, please send an email to HTG@nhhumanities.org

Open Questions programs are available on the following topics:

Dr. Kiki Berk is an Associate Professor of Philosophy at Southern New Hampshire University and currently holds the Papoutsy Chair in Ethics and Social Responsibility. She received her Ph.D. in Philosophy from the VU University Amsterdam in 2010. Her current research interests include value theory (especially happiness), analytic existentialism (especially the meaning of life), and the philosophy of death.

Max Latona, Ph.D., is an Associate Professor of Philosophy at Saint Anselm College, and Executive Director of the College's Center for Ethics in Business and Governance. He is also co-founder and President of Inti Academy, a non-profit that serves refugee, immigrant, and underprivileged children in the Manchester, NH area. Having earned his doctorate in philosophy from Boston College in 2001, Dr. Latona has published numerous articles in philosophy and has been teaching philosophy and ethics for nearly 20 years.

Timm Triplett is an Associate Professor of Philosophy at the University of New Hampshire. He teaches courses on a variety of topics and has published work in ethics, epistemology, and other areas. His 2014 book Morality's Critics and Defenders: A Philosophical Dialogue, concerns how the idea of a universal morality has been criticized and how it might be justified. He has conducted philosophy workshops with elementary school children and has taught a seminar for undergraduates focused on introducing philosophy into the pre-college classroom

Our first "Open Questions" program, "What Does It Mean to Be an American?", was held on February 7, 2019 at Concord Public Library. For program description and facilitators, click HERE.

On April 2, 2019 in Plymouth, we hosted an "Open Questions" program called "Are We What We Eat?" at the Pease Public Library. For program description and facilitators, click HERE.

On April 4, 2019 in Portsmouth, we hosted an "Open Questions" program called "Are We Working Too Hard?" at the Portsmouth Public Library. For program description and facilitators, click HERE.

On July 10, 2019 in Gilford, we hosted an "Open Questions" program called "Is Privacy Dead?" with Maria Sanders. For program description and facilitators, click HERE.

In 2019, on November 12 in Exeter and November 14 in Bethlehem we hosted "Open Questions" programs called "What Does It Mean to Be An American?" with Dr. Max Latona and Dr. Joshua Tepley. Click the links for program description and facilitator information.

Stanford Encyclopedia of Philosophy is an excellent resource for state-of-the-art
introductions to virtually every area of philosophy: