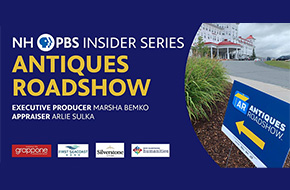 ANTIQUES ROADSHOW is one of the all-time most popular and award-winning PBS programs. Recently, the ROADSHOW crew filmed three episodes of its 26th season right here in the Granite State!

Join us for a special New Hampshire PBS INSIDERS SERIES with ANTIQUES ROADSHOW. You’ll meet ANTIQUES ROADSHOW Executive Producer Marsha Bemko and ROADSHOW appraiser Arlie Sulka as they reveal some of the great attic finds and family heirlooms they discovered while filming at the Omni Mount Washington Resort in Bretton Woods.

We hope you’ll join us for this special online NHPBS INSIDER SERIES event with ANTIQUES ROADSHOW!

Bemko is the author of Antiques Roadshow Behind the Scenes (Touchstone/Stonesong Press, 2009), is a contributing editor to Country Living magazine, and is a sought-after speaker. As part of the ANTIQUES ROADSHOW franchise, Bemko was also at the helm of PBS’s MARKET WARRIORS and the ROADSHOW companion series ANTIQUES ROADSHOW FYI.

Prior to joining ROADSHOW as senior producer in 1999, Bemko worked on several WGBH-produced public affairs programs for PBS, including Culture Shock (1999), a historical series about censorship in the arts and freedom of expression, and Discovering Women (1995), a series about six women scientists. Bemko also worked in a variety of production capacities for the FRONTLINE public affairs series beginning in 1982.

Arlie Sulka, a graduate of Smith College, is the owner of the world-renowned Tiffany gallery, Lillian Nassau LLC in New York City. Lillian Nassau, the gallery’s founder, has been credited with reviving the interest in and almost single-handedly creating the market for the work of Louis Comfort Tiffany. In 1980, Mrs. Nassau recruited Ms. Sulka to work alongside her in the legendary gallery.

A recognized specialist and dealer in late 19th and early 20th century decorative arts, Ms. Sulka has been a devotee of the works of Louis Comfort Tiffany and Tiffany Studios, particularly his blown glass, lamps, windows, mosaics, and ceramics. Having over 40 years of experience in the field of antiques, Ms. Sulka lectures in museums around the country, has published articles, works as an appraisal consultant for private clients and various museums in North America and in Europe, and has been a part-time lecturer in the NYU Continuing Education Appraisal Studies Program. She also serves on the board of directors of The National Antiques and Art Dealers Association of America, Inc.(NAADAA), the Art Glass Forum and the Corning Fellows. Ms. Sulka is also a member of the Chairman’s Council of the New York Historical Society. Since 1998, she has appeared as a guest appraiser on PBS’s ANTIQUES ROADSHOW.