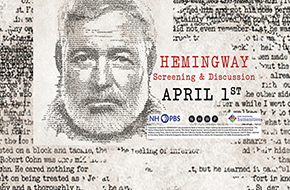 HEMINGWAY is a three-part series, directed by Ken Burns and longtime collaborator Lynn Novick, that paints an intimate picture of Hemingway, the writer, who captured on paper the complexities of the human condition in spare and profound prose and whose work remains deeply influential around the world. The film also penetrates the myth of Hemingway, the man’s man, to reveal a deeply troubled and ultimately tragic figure and explores Hemingway’s limitations and biases as an artist and a man of his time.