Lights, Camera, Civics! What the Constitution Means to Me 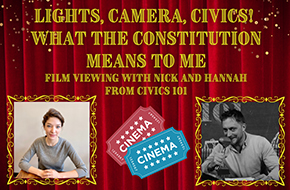 Join NH Civics for a viewing of Heidi Schrek’s What the Constitution Means to Me followed by a post-viewing discussion led by Nick Capodice and Hannah McCarthy of Civics 101.

“Fifteen year old Heidi earned her college tuition by winning Constitutional debate competitions across the United States. In this hilarious, hopeful and achingly human new play, she resurrects her teenage self in order to trace the profound relationship between four generations of women and the founding document that shaped their lives.”

This event is free, but advance registration is requested.

This program was funded in part by a Focus Grant from New Hampshire Humanities.