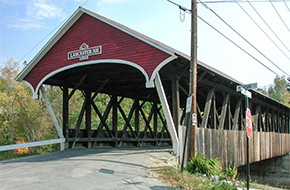 Covered wooden bridges have been a vital part of the NH transportation network, dating back to the early 1800s. Given NH's myriad streams, brooks, and rivers, it's unsurprising that 400 covered bridges have been documented. Often viewed as quaint relics of a simpler past, they were technological marvels of their day. It may be native ingenuity and NH's woodworking tradition that account for the fact that a number of nationally-noted covered bridge truss designers were NH natives. Glenn Knoblock discusses covered bridge design and technology, and their designers, builders, and associated folklore.