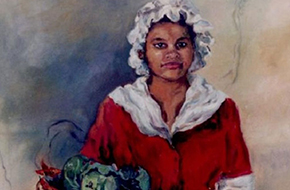 Bearing Witness and the Endurance of Voice

Lucy Terry Prince was born in Africa, where she was kidnapped by slave traders and transported to Rhode Island. While still enslaved in 1746, she wrote “Bars Fight,” the oldest known poem in the United States written by an African American. Prince later regained her freedom and moved to Vermont with her husband, Abijah Prince, and fought for her family’s land rights all the way to the highest court in Vermont. In this presentation, Shanta Lee Gander illustrates Prince’s importance as a poet and orator, and as one unafraid to fight for her rights within the landscape of early Vermont, New England, and America. Gander will also perform Lucy’s only surviving poem, “Bars Fight.”

Bearing Witness and the Endurance of Voice