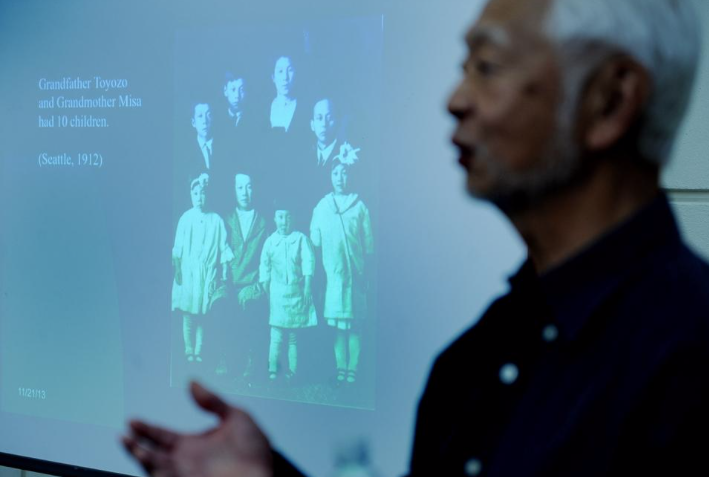 Ten libraries, two high schools, and a museum explore what it meant to be an American in 1941, and what it means today, in a project called Bitter Injustice: The Internment of Japanese Americans in World War II.

Ten New Hampshire public libraries will promote reading across their communities on the internment of Japanese Americans during World War II. Libraries in Atkinson, Danville, Hampstead, Kingston, New Durham, Newmarket, Plaistow, Sandown, Stratham, and Wolfeboro, along with the Timberlane Regional High School, Kingswood Regional High School, and the Wright Museum, will collaborate in this shared reading and cultural learning experience.

Dr. David Sakura is a third-generation Japanese American and NH resident who was sent with his family to the Minidoka internment camp in Idaho. UNH English professor Monica Chiu, who specializes in Asian American studies, will moderate a discussion with Dr. Sakura at Plaistow Public Library on May 11 at 6:30 pm.

The project will also feature in-person appearances by Jamie Ford, best-selling author of Hotel on the Corner of Bitter and Sweet, which was awarded the Asian Pacific American Award for Literature. Ford will speak at the Timberlane Performing Arts Center on Monday, May 16 at 6:30 pm, and the Wright Museum of World War II on Tues., May 17, at 6:00 pm.

Copies of Hotel on the Corner of Bitter and Sweet; as well as Facing the Mountain: A True Story of Japanese American Heroes in World War II by Daniel James Brown, They Called Us Enemy by George Takei, Baseball Saved Us by Ken Mochizuki, and other books on the subject will be available at participating libraries for book club discussions and related events.

This project is made possible with support from a New Hampshire Humanities Community Project Grant, in partnership with the National Endowment for the Humanities. Additional support is provided by Timberlane Regional High School, the Wright Museum of World War II, and Kingswood Regional High School. For more information about Bitter Injustice: The Japanese-American Internment of World War II, please visit the project website at https://bitterinjustice.wordpress.com/.