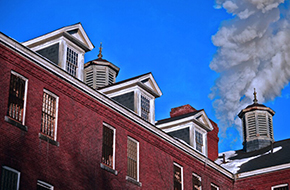 Who lived and worked in New Hampshire Hospital during its 180-year history? From its initial conception to its founding as the New Hampshire Asylum in 1842, the institution has experienced enormous changes and challenges. Dr. Paul Shagoury, former chief psychologist at New Hampshire Hospital in Concord, will draw on both historical records and personal accounts left by patients, nurses, and doctors, showing how their personal experiences at the hospital reveal a larger story – one filled with hope and practicality, successes, and disappointments – about our society’s attempts to understand and treat what we now call mental illness.

Paul Shagoury is a New Hampshire native. He graduated from Tufts University in 1966 and completed his training in clinical psychology with a Ph.D. from the University of Florida in 1971. Dr. Shagoury worked in clinical and administrative capacities in community mental health centers in Maine and New Hampshire until 1982 when he became a founding partner of Green House Group, PA in Manchester, NH. Returning to public health to conclude his professional career, Dr. Shagoury joined the psychology department of New Hampshire Hospital in 2006 from which he retired as chief psychologist.