A Conversation with Atifete Jahjaga, Former President of Kosovo 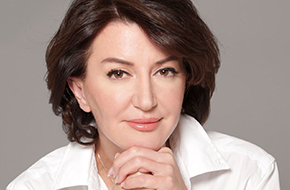 Since its founding, the United States has struggled to determine the extent of its role during international conflict. How much could–or should–the US get involved with conflicts in other parts of the world? And what is our individual responsibility as global citizens? We'll explore these issues in our new, three-part Humanities @ Home virtual series, "World War Free? Our Role in a Turbulent World."

Atifete Jahjaga served as the fourth, and the first woman, President of the Republic of Kosovo. She is Kosovo’s first non-partisan candidate, the first female head of state in the modern Balkans, and the youngest female world leader to be elected to the highest office. Atifete Jahjaga constantly participates in national and international conferences and initiatives aimed at empowering women and supporting the survivors of sexual violence during the war.

She continues to be resolute in her fight against violent extremism and radicalization and a staunch promoter of peace and stability for the Balkans and beyond. During her presidency, Atifete Jahjaga worked diligently to bring women to the forefront of Kosovo’s political, economic, and social life as a means of ensuring a long-lasting democracy.
In March of 2018, President Jahjaga established the Jahjaga Foundation- an initiative that focuses on youth and women empowerment towards achieving social change in Kosovo.

This virtual lecture series will seek to answer these questions as an extension of our A More Perfect Union initiative from the National Endowment for the Humanities.

"Kosovo war: The conflict that won't go away" from BBC News

Diplomacy at Gunpoint: Kosovo: the Illegal and Unnecessary War by James Rothrock