From Hurricane to Climate Change: A Region Responds 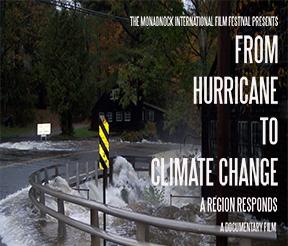 According to environmentalist and author Bill McKibben, âClimate change is actually the biggest thing thatâs going on every single day.â In response, the Monadnock Institute of Nature, Place and Culture at Franklin Pierce University, with support from New Hampshire Humanities, has produced a documentary film focused on climate change adaptation and resiliency in New Hampshireâs Monadnock region.

The film begins with the devastating flood and fire as a result of the Hurricane of 1938 in Peterborough, and the subsequent construction of the MacDowell Dam. Using interviews with meteorologists, climatologists, city planners, business leaders and ordinary citizens, the film underscores the changes that southwest New Hampshire has experienced over the last several decades as the climate has grown wetter and warmer. The film highlights the effects of severe flooding, the need for preparedness given projections by climate experts, and strategies for mitigation and adaptation embraced by business leaders, town administrators, community advocates, and families.

Following its successful premier in Peterborough in October, From Hurricane to Climate Change will be screened on Tuesday, December 6 at 7:00 pm at Keeneâs Colonial Theatre, followed by an audience and panel discussion. This screening is free and open to the public. For details, visit www.thecolonial.org.